The Great Pacific Garbage Patch is a growing problem in the northern Pacific Ocean and one that could dramatically alter life on our planet within the next 20 years. 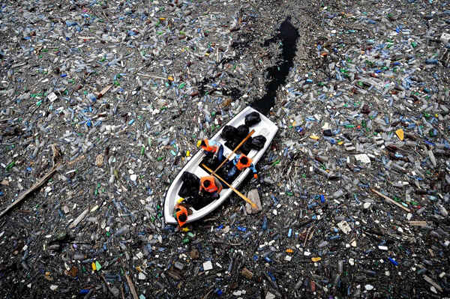 I remember the first time I felt it; I was paddling out on my surfboard and noticed a mushy, plastic-like substance sliding through my fingers. That’s what started my obsession with the Great Pacific Garbage Patch, says charity fundraiser and environmentalist Veronica Grey. The patch is located between Hawaii and California in the northern Pacific Ocean, where millions of small bits of plastic have gathered in a vortex of ocean currents known as a gyre.

Fifteen years ago The Patch was the size Texas, but now it’s the size of the continental United States, says Grey, who used her iPhone to shoot the documentary, which features renowned scientists, journalists and environmentalists.

Grey paired her professional skills with her personal passion for the ocean, creating the award-winning documentary Aqua Seafoam Shame, (www.Pacific-TV.com), which spotlights the mess in the ocean that has garnered precious little media attention, she says.

Plastic in the ocean has far-reaching implications that, if not addressed within 20 years, could change life on this planet, she says. To date, 177 species of sea life are known to ingest plastic; other species feed on those creatures, extending the chain of damage.

People EAT the seafood that eats plastic, and the planet gets its rain from the oceans, which are being polluted at an exponential rate, she says. We use significantly more of our planet’s surface as a dump than for growing food; this has to change.